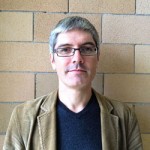 Dafydd Hughes is a musician, artist, programmer and educator based in Toronto. He has performed and recorded with some of Canada’s most notable artists, including Feist, Esthero and Jacksoul. He is active in Canada’s jazz, pop and experimental music scenes through solo work and various collaborations. His work, both musical and visual, playfully explores the unpredictable intersection of analog and digital experiences of the world.

He is a member of the Board of Directors at Toronto’s InterAccess Electronic Media Arts Centre, where he teaches workshops and spends time exploring the interface between technology and the creative impulse, which generally involves taking things apart and finding himself unable to put them back together.